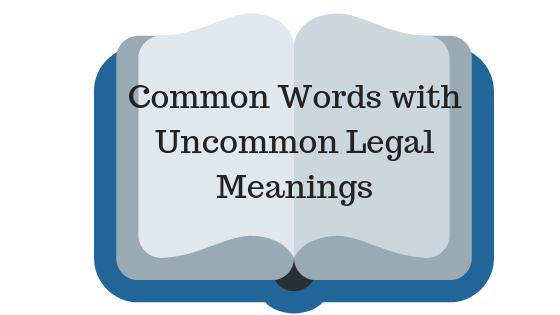 In his 1963 work “The Language of the Law,” the eminent legal linguist David Mellinkoff observed that legal discourse often uses “common words with uncommon meanings.” Indeed, in both Spanish and English, common words and expressions often take on unexpected meanings when used in legal contexts, and there are many simple, seemingly inoffensive everyday words and expressions that can prompt translation mistakes if their special legal meanings are ignored.  In this section I include some of the presumably simple legal English expressions that my students and translation clients have found most puzzling, along with a selection of legal Spanish terms that may stump translators when initially entering the legal translation field.

“Bench” has several meanings in legal contexts, both literal and figurative. In its literal sense, rather than sitting in individual seats (escaños) as do, for example, the diputados in the Congreso de los Diputados in Spain, in the UK Parliament’s House of Commons (Cámara de los Comunes) MPs (“Members of Parliament”) literally sit on benches. The first or “front row” of benches on either side of the aisle is reserved for ministers and leaders of the principal political parties. Thus the expression “front benchers” generally refers to government ministers and opposition leaders, while “back benchers” denotes MPs who often do not hold official positions in government or in their respective parties, and who literally sit on the back benches.

In other respects, in common law courts the seat of a judge has traditionally been referred to as the “bench,” (although in modern courts judges generally sit is overstuffed black leather chairs). Thus, when holding trial a judge wishing to confer with an attorney may indicate for him to “approach the bench.” In a figurative sense “the bench” often denotes all of the judges on a given court or the judiciary in general (la magistratura or la judicatura). In that regard, the expression “full bench” refers to el pleno del tribunal (or el tribunal en pleno), and “he has served on the bench for 15 years” means “ha ejercido de juez (or) magistrado durante 15 años.” “Bench trial” is a synonym of “nonjury trial” (juicio sin jurado), and the expression “bench ruling” (literally resolución dictada desde el estrado) may perhaps be used to describe what in Spanish practice is often called a sentencia in voce or sentencia de viva voz (i.e., an “oral judgment” or “judgment rendered in open court”). Likewise, in British usage a lawyer who has been appointed a judge is said to have been “raised to the bench” (nombrado juez), but literally, elevado a la judicatura).