One of the pitfalls of legal translation is that the same concept may often be known by several different terms. Lawyers are aware of these variants; legal translators may not be. In this section I will include some of the legal terms in Spanish law that are essentially the “same thing with a different name.” 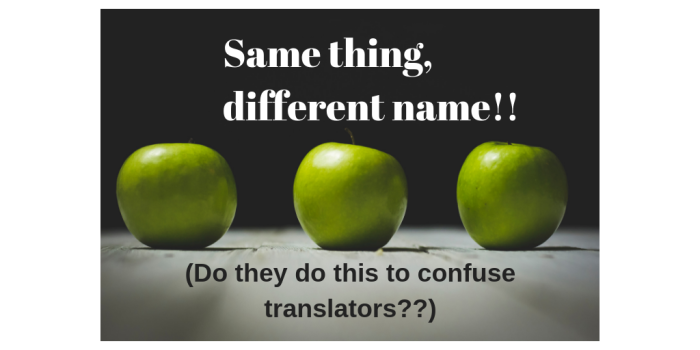 But this same institution is known by other names in other autonomous communities. Procurador is the term used in Castilla y León (Procurador del Común de Castilla y León). The ombudsman in Aragón is known as El Justicia de Aragón, while in the Canary Islands the term is Diputado del Común de Canarias. And still others are known by the term in the co-official language of their comunidad: Sindic de Greuges de Catalunya in Catalonia, Sindic de Greuges de la Comunitat Valenciana in the Comunidad Valenciana, Valedor do Pobo Galego in Galicia, and Ararteko in the Basque Country. The Defensor del Pueblo de Navarra is also known by its name in euskera, Nafarroako Arartekoa.

Asturias previously had an ombudsman (2005-2013) known as Procurador General del Principiado de Asturias (Procurador Xeneral del Principáu d’Asturies in asturiano), as did La Rioja (Defensor del Pueblo Riojano (2006-2013) and Murcia (Defensor del Pueblo de la Región de Murcia (2008-2012). The Defensor del Pueblo de Castilla-La Mancha was likewise eliminated in 2011. The autonomy statutes (estatutos de autonomía) of Cantabria and Extremadura provide for an ombudsman (to be known respectively as Defensor del Pueblo Cántabro and Personero del Común), but those provisions were never implemented. A 1993 law provided for a Sindic de Greuges de les Illes Balears, but at the time of this writing the successive governments of the Balearic Islands have never appointed anyone to that post.