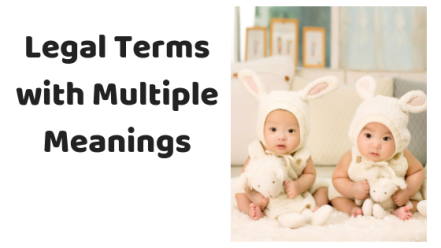 In the terminology of criminal procedure condena has two distinct meanings, denoting a criminal “conviction” (a judicial finding of guilt) or a “sentence” (the punishment imposed on a convicted criminal defendant): fue condenado por narcotráfico (“he was convicted of drug trafficking”); le condenaron a seis años de prisión (“he was sentenced to six years in prison”). Thus, in this context the expressions sentencia de condena and sentencia condenatoria refer to a “conviction” or a “finding (or) judgment of guilty.”

In the classification of civil judgments, in contrast to sentencia declaratoria (a declaratory judgment with no award of relief), sentencia de condena or sentencia condenatoria denotes a judgment awarding relief to the plaintiff (demandante) in a civil action, ordering (condenando) the defendant (demandado) to pay a sum of money or to do or refrain from doing something stipulated in the judgment. Thus, in civil procedure contexts a sentencia de condena or sentencia condenatoria is generically a “judgment awarding relief” or, more specifically, a “judgment for the plaintiff (called “claimant” in England and Wales). In that regard, condena dineraria or condena al pago de cantidad de dinero is a “money judgment,” while condena no dineraria denotes a “non-money judgment.” Condena de hacer is a judgment ordering the defendant to perform a given act (to restore or transfer certain property to the plaintiff, for example), and may be rendered as “permanent mandatory injunction” or perhaps described as a “judgment ordering (or) compelling performance.” Conversely, a condena de no hacer orders the defendant to refrain from an action indicated in the judgment, constituting a “permanent prohibitory injunction” or, rendered descriptively, a “judgment ordering the defendant to refrain from X” or “judgment restraining defendant from X.”

Condena is likewise used in expressions such as condena al pago de daños y perjuicios (“order to pay damages” or “damages order”) and condena en costas (“order to pay costs” or “costs order”). Perhaps it should be underscored that in Spanish the losing party is “ordered” (condenado) to pay damages or costs, while in English that same idea is often expressed from the perspective of the prevailing or successful party, who is “awarded” damages or costs.* Thus, el demandado fue condenado al pago de daños y perjuicios means that the “defendant was ordered to pay damages,” but this is often expressed as “plaintiff was awarded damages.” Likewise, el demandado fue condenado en costas indicates that the “defendant was ordered to pay (the plaintiff’s) costs,” but this is usually expressed as “plaintiff was awarded costs.” And in a sentencia sin condena en costas the judge makes “no costs order” (the losing party is not ordered to pay costs), which is often expressed in English as “no award of costs” (the prevailing party is not awarded costs).

In line with the above, in criminal procedure condenado denotes a person who has been convicted of a criminal offense (a “convicted criminal defendant”), or one who has been sentenced in a criminal proceeding. But the meaning of condenado is quite different in the context of civil procedure in which the term refers to the “losing party” in a civil action in which a “judgment for the plaintiff” (sentencia condenatoria) has been rendered. In that regard, the condenado in a “money judgment” (condena dineraria) is a “judgment debtor,” while the expressions el condenado a pagar daños y perjuicios and el condenado en costas refer respectively to the losing party who has been “ordered to pay damages” and “ordered to pay costs.”